Evolution of the Black Tower Icon 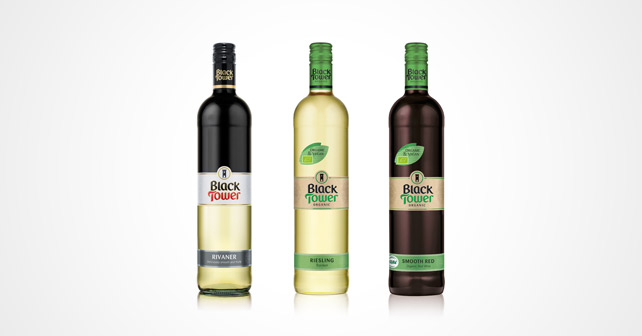 The essence of a successful brand is its ability to adapt and change over the course of time and still be instantly recognisable. Black Tower has managed this since its introduction in 1967, with a special, iconic bottle shape and a logo which is always contemporary. Now, nearly fifty years later, Black Tower is a household name and the No.1 wine brand from Germany, selling more bottles around the world than ever before.

2010 Black Tower had a major facelift and the black bottle for the flagship white Black Tower was changed to the 50:50 split bottle. This was a revolutionary move which modernised Black Tower’s appearance, whilst still retaining its characteristic features and gaining new elements to appeal to the target audience. Consumers loved the fact that they could see the colour of the wine at first glance.

Black Tower has consistently bucked the trend of the Germany category in the UK market. In fact year on year value was up 5% and volume up 5.3% (Kantar Worldpanel Purchase Panel data 52w/e 19th July 2015 vs. last year), so outperforming not only Germany but also the entire still wine category.

The new evolutionary pack reinforces feminine values and strengthens the international style of the icon brand from Germany. “With an evolved logotype we have enhanced brand recognition and made Black Tower look more international and contemporary so that it will have even greater appeal for the younger generation of wine drinkers,” said Alex Rittlinger.

In the year ahead this new evolved Black Tower will be supported with a national marketing campaign, including special “new look” highlighted packs, as well as regional activities from the beginning of March to the end of July in northwest England. The campaign will engage consumers and challenge them to try Black Tower in comparison with the other wines they drink. The “WOW it’s Black Tower” surprise is a core idea in this campaign. Initiatives will include bus sides, bus stops, newspaper coverage, increased social media activity and on-the-street activities to tickle the public’s taste buds and challenge their perception of Black Tower.

More information and image material can be downloaded here .

As a leading wine exporter the winery makes German wines popular in the whole world: with Black Tower the most successful German wine brand worldwide comes from Reh Kendermann.

As an official member of

Are you interested in a collaboration with Reh Kendermann, in our winemaking or the versatile wine compositions? Then please do not hesitate to contact us.
Contact
© 2017 Reh Kendermann